Mr. Hussein Shobokshi is a well-established Saudi businessman who more than three years ago was appointed as the honorary counsel of the Czech Republic in the city of Jeddah in Saudi Arabia.

Since the assumption of his new role, Hussein Shobokshi has been on a non-stop mission to improve the relationship between Saudi Arabia and the Czech Republic in all possible domains. Hussein Shobokshi who also happens to be a member of the Saudi-Czech Business council serves on the board of numerous companies, he also represents many Czech firms which provide products and services to the Saudi market in diverse and competitive fields.

From left: Miloš Zeman, President of the CR and Hussein Shobokshi, Honorary Counsel

Mr. Shobokshi, who was chosen by the World Economic Forum in Davos as one of the Global Leaders of Tomorrow in 1996, was helpful in organizing the visits of various Czech trade and political delegation to his country which was an important occasion to develop and improve the networkingopportunities between officials and businessmen from both countries. This was translated well economically, resulting in important and significant trade growth in between both countries which was close to 246 million U.S dollars in the year 2011 growing to over 312 million U.S dollars achieving a wopping more than 21% increase in one year. This growth covered many areas of activities including energy, construction, heavy machinery, automotive, food to name but a few of the sectors that benefited from this growing relationship.

Tourism was also a sector that benefited a great deal from these developments. Number of Saudi visitors to the Czech Republic jumped over 300% in one year as evident form the numbers of visas issued by the Czech embassy in Riyadh which reflects only a part of this beautiful story. Saudis had a very positive experiences visiting the Czech Republic, word of mouth exchanges some “feel good” stories about the Czech Republic only confirmed this.

Last March Mr. Shobokshi organized a very successful “Czech Food Festival” at the Jeddah Intercontinental   jointly with the Praha Intercontinental which contributed to this event by sending three of its top chefs to introduce some of the most famous Czech dishes. The event was a resounding success and it will be repeated again in 2014.

Through his Prague based “Shobokshi Investment” he is organizing two very important events in the Czech capital. The first one will be taking place in the Spring of 2014 which will be “the Czech-Saudi Business forum’ to introduce both Saudi and Czech business communities to each other while addressing business opportunities and highlighting the challenges and obstacles that face them. This event will feature key speakers form government, business and investment sectors. It will also address tax and legal issues in both countries. Another event will be held in the fall of 2014 which will be “The Czech-Arab economic Summit” focusing on a more macro approach to highlight business opportunities for Czech companies in the Arab world. This event will feature key note speakers from various Arab countries including business leaders, government officials and media experts.

A third event is being planned which will be hosting the “Czech Business Expo” compromising of a pavilion exposition of Czech companies from the medical, industrial and agricultural sectors in Saudi Arabia.

Mr. Hussein Shobokshi who also writes regularly in Arabic and English newspaper in Saudi Arabia and has a widely read column has written numerous articles on the Czech Republic’s achievements highlighting its success in politics, Culture and economy.

He helped distribute works of Milan Kundera and Franz Kafka translated to Arabic to schools and universities in Saudi Arabia to increase the awareness of Czech literature amongst Saudis. He will launch the “Czech cultural Days” which will be a week-long event to be held in Jeddah featuring painting and art work from Czech artists, a quartet from the Prague symphony will be playing works of important Czech composers. Crystal blowers from leading crystal producing houses will display their work and style in addition the showing of the famous Czech film Kolya winner of Academy award and golden globe Award, will take place as well.

Shobokshi has also launched two websites to help bridge relations between Saudi Arabia and the Czech Republic,http://www.crhcjed.com/ar/index.html cover the honorary consulate of  the Czech Republic in Jeddah and how it aims to serve the Czech community there as well as the business community in both countries through the services and information it provides.

The other site belongs to the Saudi Czech business gate, http://www.scbg.org/ar/index.html an entity established by Mr. Shobokshi, aiming to serve inform and facilitate business opportunities between businessmen from both countries.

Hussein Shobokshi never hides his enthusiasm about the Czech Republic’s potential which will be put into words in a book that he is finishing about this subject.  Leaders Magazine publishing 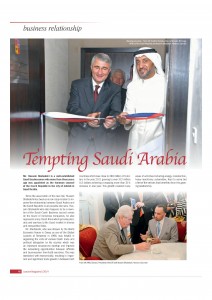 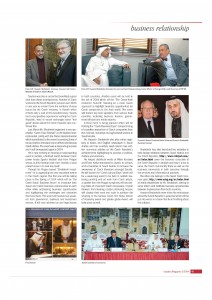